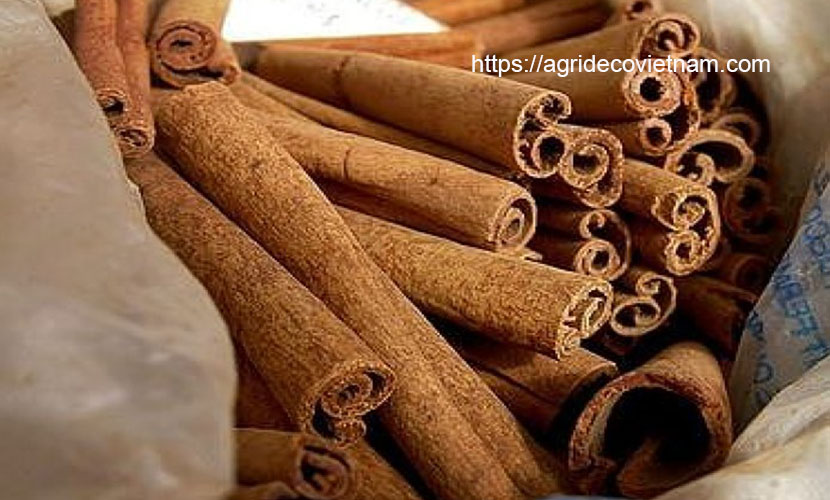 In the middle of the cinnamon harvesting season, the purchase price is still as high as the beginning of the season. Compared with last year, the current price of Quang Ngai cinnamon products increase sharply due to high export demand. As a result, it helps mountainous people in Quang Ngai province have large income from cassia products.

This month is the peaking time of cinnamon harvesting season for farmers in mountainous province of Quang Ngai. In the vast cinnamon forests from Tra Bong district Tay Tra district, local people are busy to exploit cinnamon trees.

Owning more than 1,000 cinnamon trees, Ms. Suong, a grower in Tra Hiep commune (Tra Bong district, Quang Ngai province) has to hire more people to harvest. Under the canopy of the cinnamon forest, knives run around the trunk, gently separating the peeled cinnamon barks, she carefully arranges the fresh cinnamon tubes to avoid breakage. More than 20 workers are mainly relatives in the commune, so they are familiar with exploiting cinnamon and ensuring product quality.

This year, the price of cinnamon has increased, she decided to exploit the biggest cinnamon trees for sales. There are many cinnamon trees, which are more than 20 years old with high oil content, she sells them at higher prices. “A few perennial cinnamon trees have a lot of essential oil, especially the cinnamon armpits. Each tree, I sell for more than five million VND. Fresh cinnamon by the wrist is also 50,000 VND per kilogram. The price is high, so this year I collected cinnamon barks and sold them all,” said she.

After more than one month of harvesting Quang Ngai cinnamon products, Mrs. Mai in Tra Lanh commune collects branches, leaves and bark chips waiting for traders coming. After drying, the cinnamon branches are bundled, and the cinnamon leaves are packed in compact bags. She will sell all cinnamon sticks to purchasing agents. At the end of the season, by-products such as branches, leaves, and crushed cinnamon are also sold strongly from retail outlets with demand. She said that all Quang Ngai cinnamon products are purchased at different prices, depending on supply and demand.

“I do not have any cinnamon products to sell. This year, many traders are coming here to buy. I sell from 45,000 VND to 55,000 VND per kilogram, depending on cinnamon sticks or broken cinnamon. Twigs and leaves are also worth at several thousand VND per kilogram,” shared Mai.

Tra Bong district, which is the “capital” of the cinnamon material area in Quang Ngai province currently has three exporting enterprises of cinnamon. Besides, many agents and retail collection points go to the forest to buy cinnamon for local growers. If in previous years, the price of cinnamon purchased from 20-35 thousand VND / kg, this year, the price of cinnamon increased 30-40% higher. Cinnamon barks will cost from 45 to 55 thousand VND/kg. By-products such as branches and leaves are also purchased from 2,000 to 5,000 VND/kg.

Accoring to an export company of Quang Ngai cinnamon products, this year’s export volume increased much more strongly than last seasons. At present, all Tra Bong cinnamon barks is preliminarily processed and supplied to businesses for export to Europe and the US. “The export volume at the beginning of the season has increased sharply, we have sold nearly 300 tons to our customers. This year, the demand is high, so we also buy from growers to ensure the source of goods for our partners,” shared a leader of the company.

Since the middle of February, exporting businesses have purchased more than 800 tons of cinnamon of all kinds in Quang Ngai province. Many agents and traders also buy more than 200 tons of fresh cinnamon and products from cinnamon trees.

Ms. Thy, a cinnamon purchasing agent, said that this year cinnamon products are scarce and the consumption is large, so she hires more workers to help local growers harvest. Each day, Ms. Thy’s facility buys 1.5-2 tons of cinnamon of all kinds and sells it to traders in the provinces of Quang Nam and Binh Dinh.

The whole province of Quang Ngai currently has more than 6,000 hectares of cinnamon in mountainous districts. The average yield is 9.5 tons per hectare. Particularly for this year’s spring cinnamon crop, export output increased by 20% over the same period. In addition to the acacia forest, cinnamon trees are also the main source of income for the Cor people in the highlands of Quang Ngai.

“Cinnamon is one of the key products of our mountainous region. High exporting prices help mountainous people generate higher revenue. We are focusing on geographical indications for Tra Bong cinnamon products. Hopefully, the value of Tra Bong cinnamon flavor will increase even more,” said a governor.