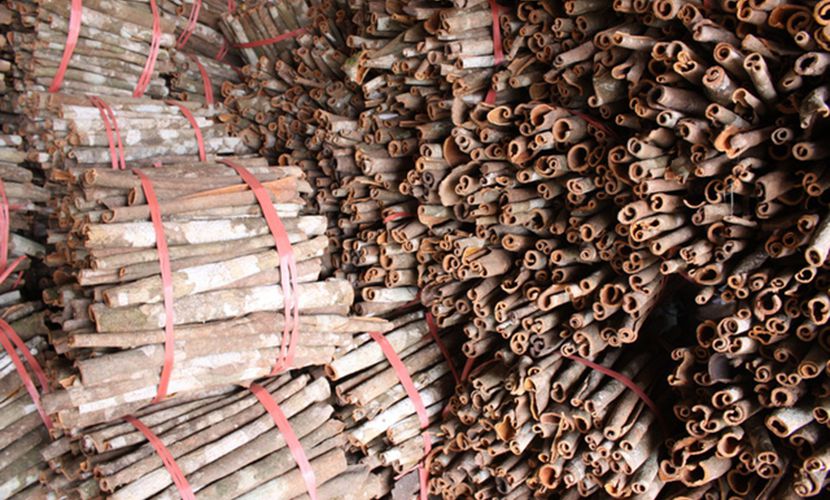 In forest products, cassia is the most valuable tree, especially for export. Cassia in Vietnam is a great economic source for ethnic minorities in Yen Bai, Quang Nam, Quang Ninh…

All the parts of cassia tree such as skin, leaves, flowers, roots contain essential oil. Especially, cassia skin has the highest level of oil content, reaching to 4% – 5%. Vietnamese cassia oil is yellow and the main ingredient is aldehyde cinamic with 70% – 90%.

In the world, cassia is naturally distributed and grown in Asian countries such as Indonesia, China, Vietnam and Sri Lanka. Cassia also has another name of cinnamon. Cinnamon is only suitable in certain localities with appropriate climatic, soil and terrain characteristics.

In Vietnam, cassia naturally grows in tropical moist forests, from the North to the South. However, natural cassia is no longer available. Instead, cassia trees have been cultivated by local growers. For a long time, Vietnam has formed four cinnamon cultivation areas with different characteristics. It is possible to preliminarily introduce 4 regions of cassia in Vietnam:

Tra Mi and Tra Bong are two districts which have largest area of cassia in Quang Nam province. These lands have good conditions of climate and soil for cassia development. Actually, Quang Nam province provides almost Vietnamese cassia for export in the South.

In addition, Quang Ninh, Thanh Hoa, Nghe An are three provinces which also produce cassia in Vietnam. However, quantity of these provinces is not so much compared to Yen Bai and Quang Nam provinces.

Main products of cassia are cassia skin and essential oil. These cassia products are mostly used in many industries, such as healthcare, food, flavor and animal feed. There is an increasing trend of using essential oil instead of chemicals. Cassia oil is one of the best selection.

In addition to economic benefits, cassia also contributes to the protection of the ecological environment. Moreover, cassia increases forest cover, keep the soil, and retain water in mountainous hills.

Recently, many localities also use cinnamon bark and skin to make handicraft products such as tray and kettle. Cassia powder is useful to test animal feed to increase the quality of meat of cattle and poultry.