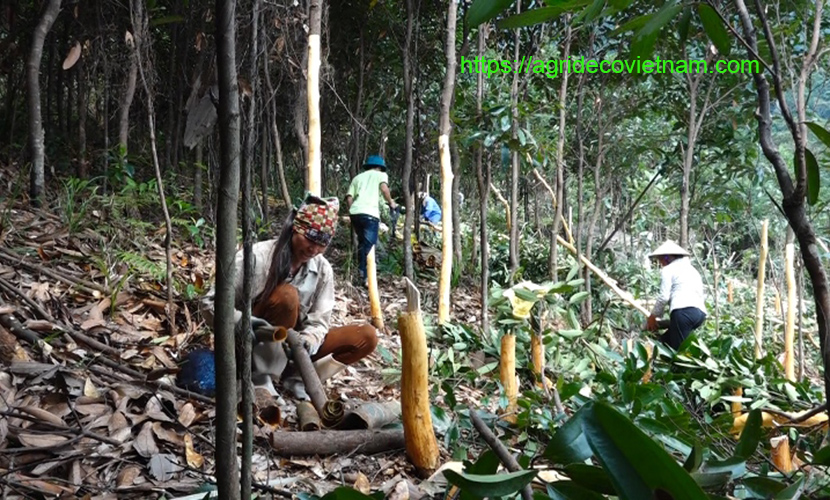 Coming Yen Bai province, it is easy to catch cinnamon trees everywhere. Cinnamon is a tree that not only brings economic benefits to each family, but also closely attaches to the cultural life of the Dao community here. Since ancient time, cinnamon has been one of the four valuable herbs. Nowadays, Vietnam cinnamon products are main ingredients in cosmetic industries and are spices in many dishes.

Going to the cinnamon hill of Mr. Trieu, a local grower in Van Yen district, we meet his family exploiting the mature cinnamon trees. He said that he planted 9 hectares of cinnamon, harvesting two crops per year. Last year, the price of dried cinnamon barks was VND 40,000 / kg. This year, the family joined the organic cinnamon growing group, which output was purchased by a spice exporting company at the price of VND 60,000 / kg.

Under organic production practices, households cannot use chemical fertilizer, herbicides or any chemicals. Cinnamon trees are also not watered, but must rely entirely on rainwater. The daily care diary must be recorded to document the project staff implementing the product certification procedure.

Ms. Phuong, another grower, said that her family has 10 hectares of Vietnamese cassia. Initially her family planted by seeding method, which took 10 years for cinnamon trees to harvest. Ms. Phuong said: “My family harvests in a thin way, we peel every tree and then cut. Wood is sold for VND 1.2 million / m3. With 10 hectares of Vietnam cassia, we get 10 tons of fresh barks, equivalent to 5 tons of dry barks, sold for VND 250 million.”

According to an expert of Helvetas Organization, the project promotes sustainable trade in natural raw materials in Vietnam, Laos and Myanmar. The project was implemented from 2016 to the end of 2020, with a total budget of USD 5.4 billion sponsored by the Swiss Economic Department and implemented by Helvetas. Governmental partners have signed memorandum of cooperation in Vietnam, Laos and Myanmar.

After 3 years of implementation, the project components in Vietnam have achieved good results. The project developed partnerships with eleven companies, six of whom have already sold bio-commercial products to new markets in the region and Europe.