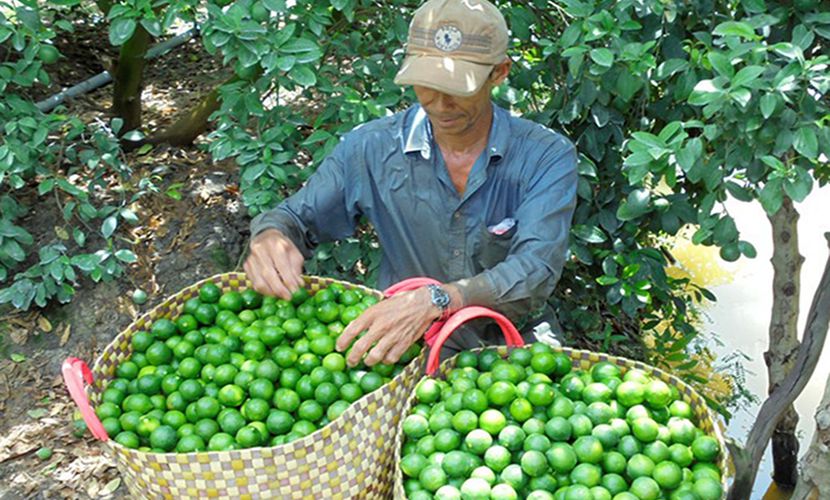 There has been a promotion conference in agricultural sector in Japan lately. At the conference, Japanese customers showed special interests in fresh lime from Vietnam.

Vietnamese fresh lime is mostly cultivated in Ben Luc District in the Mekong Delta province of Long An. The Middle East countries are the main markets for fresh lime from Vietnam. In addition, Vietnam exports seedless lime to the U.S, Canada and Europe.

Mr. Nisaka, governor of Wakayama, showed interests in agricultural cooperation between Vietnam and Japan. Also, he would like to promote cooperation in agriculture sector between Wakayama and Long An province. Long An can send growers to Wakayama to support fresh lime production there, he said.

Mr. Kha Chan Tuyen, an agricultural expert, said Japan would like to import fresh lime from Vietnam. Besides, Japan also wanted to purchase lime products, such as lime powder and canned lime juice. He noted that desiccated lime slices, lime leaves, dried lime peel, and lime essential oil are all favored by Japanese.

A chairman of a seedless lime company in Vietnam said agricultural experts are supporting his company and local farmers with techniques to cultivate quality seedless limes. He also believed that fresh lime from Vietnam would gain a firm position in the Japanese market. His company is exporting Vietnamese fresh lime to Muslim markets and some European countries.

However, he said, exporting fresh lime from Vietnam to Japan were not an easy task. Japanese maket would require higher quality and safety standards. In the meanwhile, there is a small number of fresh lime planting in Vietnam can meet such requirements.

He recommended that Vietnam should apply high technology to produce clean fresh lime to improve productivity. Furthermore, the government should popularize international standards in cultivation, such as GlobalGap to produce Vietnamese clean lime. Only doing this well, Vietnamese fresh lime would have stable position in Japanese market and developed markets, as well.