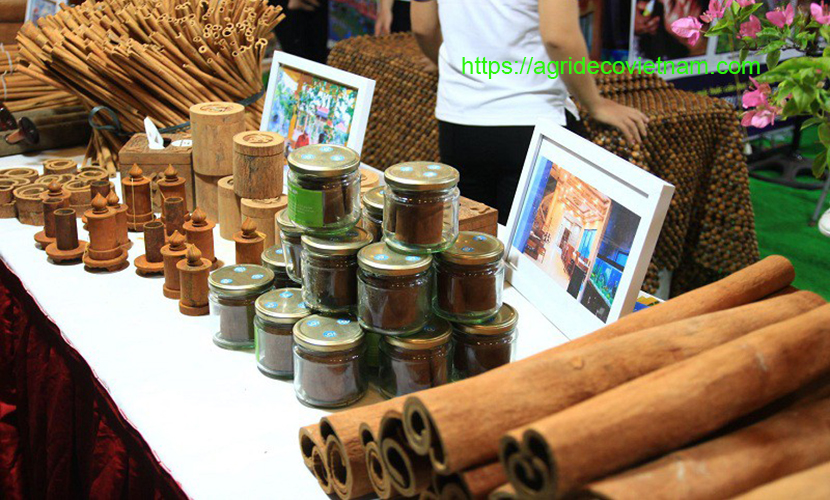 Cinnamon in Vietnam has been planted for a long time but has not developed as strong as in recent years due to long life. More than five years ago, the price of cinnamon barks in Vietnam went down to only 2,000 VND / kg. Moreover, there were very few traders coming to buy, so local growers forgot. Only when the price of cinnamon barks inched up they came back for cinnamon cultivation.

Cinnamon in Vietnam now generates both long-term harvest and annual harvest. There are two harvesting crops of Vietnamese cinnamon each year. Namely, the first crop lasts from February to March, while the second lasts from July to August (lunar calendar).

During these crops, Vietnam cinnamon barks are easy to peel and high oil content. Compared to other trees, cinnamon has a fairly long age, usually more than years to generate high value. However, there are few trees in mountainous areas that yields high economic value like cinnamon.

All leaves, branches, and stems of cinnamon trees are used to distill essential oil. On the current market, cinnamon barks from Vietnam are preferred, often used in medication. With a special aroma, cinnamon barks are also used as spices.

From cinnamon barks, local growers also process a lot of rich products such as cinnamon sticks, cinnamon powder, and handicrafts. Cinnamon essential oil which is extracted from leaves and barks, is one of the flavors that make up the famous perfume.

The cultivation area of Vietnamese cinnamon has increased sharply in recent years. In Bac Kan province, according to statistics, the current cinnamon area is more than 3,000 hectares. In which, Cho Don and Cho Moi districts account for the majority. Among them, the exploiting area is more than 1,000 hectares, the remaining are small trees that have been planted in recent years.

However, there are currently no cinnamon production and processing facility here. Therefore, the main products are crude cinnamon barks. Also, leaves and branches left in the forest or just for fuelwood are wasteful.

In Yen Bai, the current price of cinnamon sticks is more than VND 95,000, which generates high profit for local growers here.

With more than 23,000 hectares of cinnamon, Van Yen district has become the largest cinnamon growing region in Vietnam. Farmers plant cinnamon trees everywhere, in the forest, on the hills, around the house.

Therefore, cinnamon has become a key crop of Van Yen district to reduce poverty and enrich the wealth for many families. Especially, Van Yen cinnamon products have become reputable brands in the domestic and international markets.

With the collection of barks, trunks, stems, leaves and branches, many farmers have earned hundreds of VND million per year. Fresh cinnamon leaves are purchased to extract essential oil at the price of VND 2,000 / kg. Purchase price of fresh cinnamon barks are more than VND 30,000 / kg, not to mention the woody body. A large cinnamon tree sells all the leaves, branches, and barks at the price of more than VND 3 million. Accordingly, one hectare of cinnamon is sold cheaply at hundreds of VND million.

Additionally, after receiving geographical indications for Van Yen cinnamon products and cinnamon market is stable, the price of cinnamon increased 2 times in previous years. Every harvesting season in March and August, many local growers go up hill to peel and dry cinnamon products.

Every year, the local market sells more than 10,000 MTs of cinnamon products, earning hundreds of VND billion. After peeling for cinnamon barks, cinnamon trunks are processed as wood products instead of burning as before.

In Luc Yen district of Yen Bai province, farmers in the communes along Highway 70 have shifted most of their area to growing cinnamon. Needless to say, they are aware of the economic benefits from Vietnamese cinnamon trees. In 2014, the whole district cultivated 72 hectares of cinnamon, but now it has increased to 260 hectares, up more than 350%.

With the development of raw materials , there are many processing factories of cinnamon arising. This would contribute to creating jobs for thousands of local workers.

In Quang Nam province, there are more than 5,000 hectares of cinnamon growing in mountainous districts. In which, Bac Tra My district accounts for 60% of the total. Tra My cinnamon brand is very famous for high quality and oil content.

An export company of cinnamon products in the district has now purchased more than 300 MTs of cinnamon barks. However, the purchasing demand is still very large because it’s capacity consumes more than 15MTs per day.

With the superior advantages brought, cassia products from Vietnam continues to be a key crop for economic development in many localities. However, for people to reduce poverty, get rich from cinnamon sustainably, it is necessary to develop processing industries, diversify products from cinnamon. Additionally, the government should promote cinnamon products to increase consumption in the international market. Doing these well would raise the income for cinnamon growers and help them to develop this specialty tree.