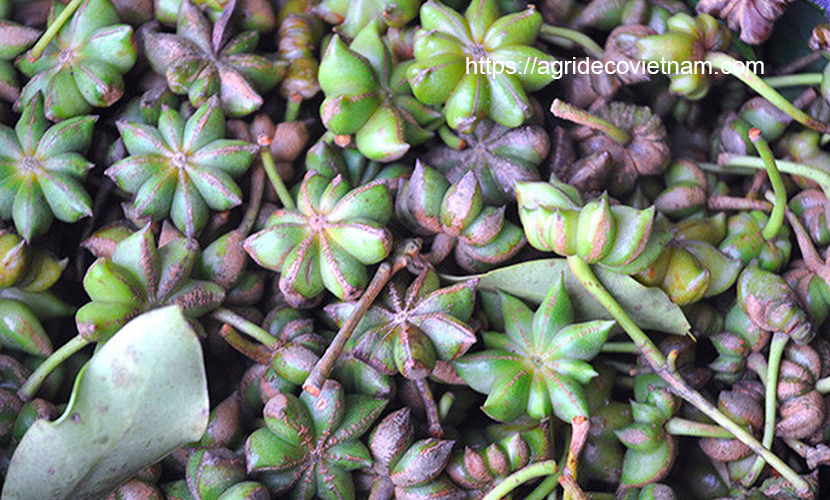 Star aniseed in Vietnam is mostly grown in the mountainous provinces of the North. In which, Lang Son province is famous place with immense forests of star aniseed as the “green gold mine” of ethnic minorities here. At present, star aniseed not only gains high production but also double price compared to the year of 2018. This price has been the highest level than ever, which makes local growers very happy.

In particular, Van Quan is the district with the largest anise planting area of ​​the whole province. Specifically, the total area of ​​star anise of the district is more than 14,000 hectares, of which 10,000 hectares are being harvested. The main harvesting time of star anise is “autumn crop”, lasts from July to October. This year, the main crop has a high productivity and high prices, so local people here are very happy.

Coming Van Quan these days, it is not difficult for us to see local people being busy in the star anise fields. Taking the bus from the city to the place of  “green gold mine”, we feel faintly sweet scent of star aniseed.

Going into the center of the district, along both sides of the road, we can see anise flowers being dried. In recent years, income from growing star anise has helped people in the district reduce poverty. Especially, many families has become rich from Vietnamese star anise cultivation.

Ms. Hoan, a local grower, said: “My family owns 4 hectares, in which, 2 hectares are the organic star aniseed. This year, star anise reaches high price, which makes us very happy. At present, traders will buy fresh star anise at the price ranging from 30,000 to 35,000 VND / kg. In the morning of picking forests, people here get money in the afternoon. Therefore, everyone is eager to get up early to harvest”.

Ms. Hua, another grower, added: “This year, both price and productivity of star anise are very high, so we are very happy. My family owns more than 5 hectares of Vietnam star anise, which generate a lot of flowers. After picking, we will move fresh star anise to buying points. This morning, we have sold it at the price of  VND 35,000 / kg.”

From her experience, it is quite hard to make high quality star anise in Vietnam. Accordingly, it is necessary to boil fresh star anise by water steam in one hour. After that, dry it in the sun and stir regularly and continuously. Doing well these jobs will make the anise flowers dry and open evenly and beautifully.

Mr. Sang, Head of Van Quan district, said: “In recent years, the area of ​​Vietnamese star anise in Van Quan district has been expanding, so the production output has increased. In 2018, the district also deployed the project of organic star anise cultivation. Up to now, the project has showed first-step results and growers changed the practice of planting star anise.”

Preliminary statistics show that the district’s total output of dried anise flowers reaches more than 10,000 MTs / year. Accordingly, the annual revenue is approximately 400 – 450 billion VND. It is estimated that the output this year will reach more than 17,000 MTs, up 70% than 2018.

However, the consuming market for Vietnam star aniseed is mainly China. Therefore, the price usually change very quickly and heavily depends on Chinese traders. In the coming time, the district will deploy many solutions to promote consumption in other markets, such as EU, the US…