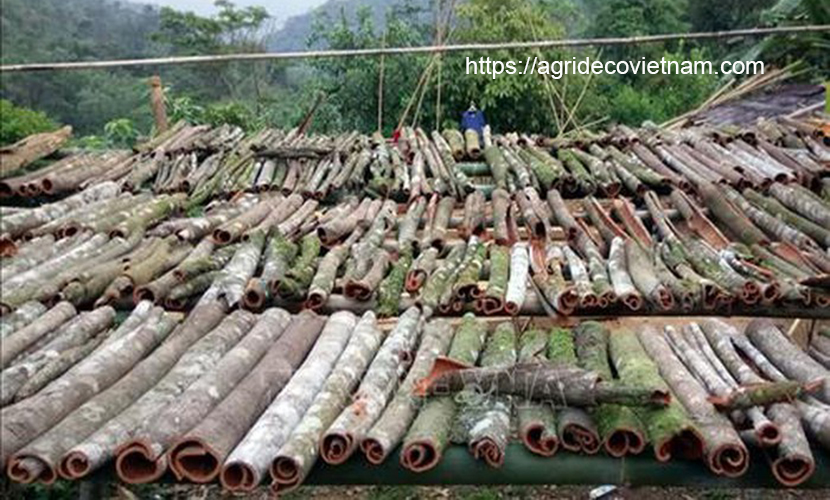 Located at an altitude of 1,500 m above sea level, Tra Leng commune has favorable climate and soil conditions for Vietnam cassia trees to grow and develop. On the road leading to the commune, you can easily see the decades-old cinnamon forests. Tra Leng commune currently has more than 700 hectares of cinnamon and is largest cinnamon area of ​​ Nam Tra My district.

Tra My cinnamon has been recognized as a precious medicine by the people here. The recognizing feature of Tra My cinnamon is its rough appearance, many lichen spots and gray – green moss. Tra Leng commune has 546 households and most of them here have several cinnamon gardens. They consider cinnamon trees as sacred trees the nature brings this land.

According to the old man Ho Van De, for many generations, local people here have kept the custom of “growing cinnamon for their children”. When a child was born, parents will plant an extra cinnamon garden. Then, when the children grow up, they will have cinnamon garden to do business. People here are always proud of having the fragrant cinnamon forests that rarely could be found from anywhere.

“In the past, families with many old cinnamon gardens were considered to be the richest in the village. Each old cinnamon tree with the diameter of two hugs could exchange for a healthy buffalo. Nowadays, thanks to Vietnam cinnamon products here, people can afford to build houses and raise their children to study” said the elder Ho Van De.

Tra My cinnamon is indigenous kind, with a longer growing time than others. It takes more than 10 years for bark exploitation.

In every cinnamon garden in Tra Leng, people retain a few old cinnamon trees for getting seeds and conserve precious genetic resources of indigenous cinnamon varieties. The source of cinnamon varieties here is also brought to other communes to grow and replicate for economic development.

In Tra Leng, there are 2 harvesting crops of cinnamon per year. One from March to June and the other from October to November. Tra Leng commune exploits from 120 to 150 tons of Vietnam cinnamon products on average each year, with a value of 10 billion. Exporting companies of spices usually come directly to the garden to buying cinnamon products. Recently, Nam Tra My district has promoted cinnamon products to increase consumption.